We’ve all heard that dude in a guitar shop complaining about how bad the factory setups are at *insert any guitar manufacturer*. It’s easy to fall into the trap of blaming a company for poor action or bad intonation but whose fault is it really?

Larger companies such as Gibson, Fender, and Paul Reed Smith are producing hundreds, if not thousands, of guitars a month and that’s just at their American factories! While it may seem intuitive to think that this is where the factory setup problems arise due to the massive number of guitars rolling through, it’s not. Far from it in fact. Both Gibson and Paul Reed Smith have an initial setup as well as a final inspection to double check not only the setup but many other aspects of the instrument as well. It’s a solid bet that if you were to play every guitar before it’s boxed up, they’d all play exactly the same.

So since this is the case, where do these bad setups you encounter at Guitar Center wall come from? The short answer is their environment. Obviously, with some exceptions, your guitar is made of wood. While major companies do everything they can to get all the movement out of the billets, there’s only so much you can do. With temperature and humidity changes from the factory to your favorite guitar store, a guitar is going to expand and contract in different ways. These micro changes in the wood are going to negate the factory setup. Now a good guitar shop is going to know this and double check setups on their guitars every once in a while; however, a place like Guitar Center that stocks hundreds of guitars can’t realistically stay on top of it. It is typically months, sometimes even years, after a guitar leaves the factory before it’s sold giving it plenty of time to settle and warp.

Pro tip: If you are buying a guitar from a store, demand (politely) that it gets a professional setup before you buy. Usually places will give you the setup for free because you are about to drop $1,500+ on an instrument.

A guitar setup is like an oil change in your car. We don’t get them as often as we should, but if you have minimal knowledge of your instrument you can save some money and do it yourself. The rest of this article is going to be how to properly set up your electric guitar, acoustics will be for another day. It may just be the Wyoming in me, but my favorite way to think about and explain the setup order is with a horse. I apologize for the crude photo but it gets my point across. I drew it just for you, you’re welcome. 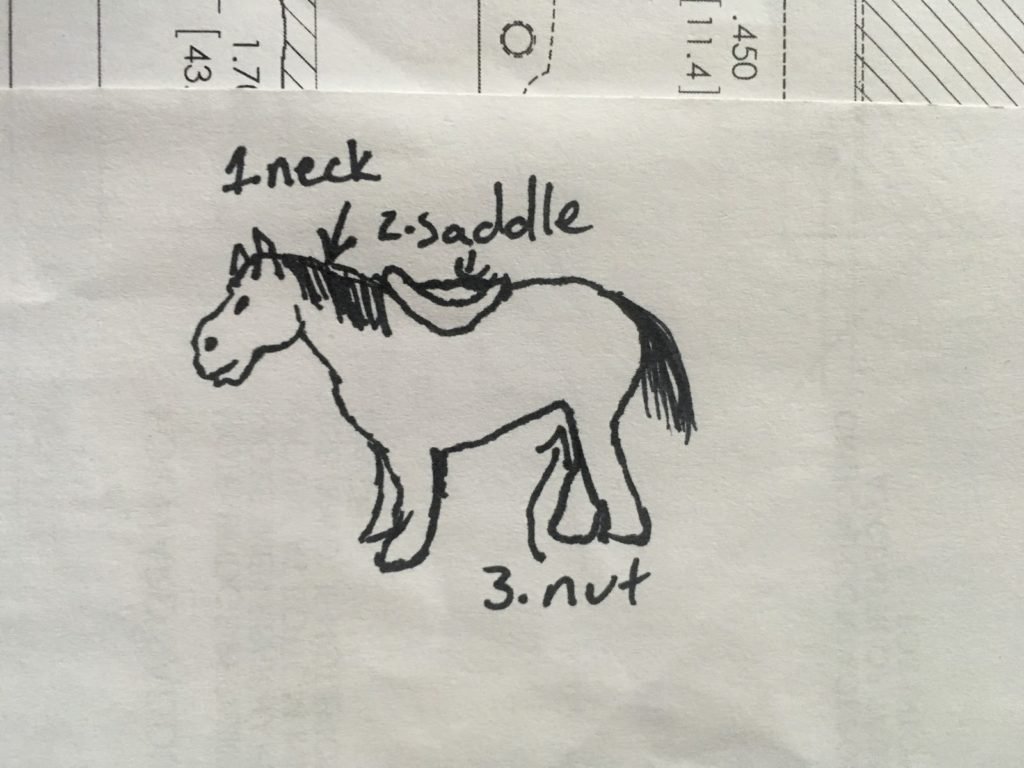 The absolute first step is to tune the guitar to pitch and take all measurements in position as you would if you are playing. This will ensure your measurements are accurate as the guitar is being played, not as it’s laying on a bench. Place a capo on the first fret and leave it there through most of the setup. This will eliminates the nut as a factor when measuring string heights.

Let’s start at the neck relief. This is adjusted using the truss rod. You can find a million different neck relief specs online and it can be overwhelming trying to find the right one. For each of these, I’ll list the factory specs as well as my own. It is up to you as a player to find out what you like best but these specs are great places to start. To measure the relief, make sure your capo is on the first fret and with one hand press down on the “body fret”. This is the closest fret at which the fingerboard meets the body. While holding that down, measure the distance between the bottom of the low E string and the top of the 7th fret on a six string and 9th fret on a bass. You can measure with a depth gauge, feeler gauge, or my personal favorite a six inch metal ruler graduated in 64ths. Below is a chart of factory specs as well as my own:

If you don’t see your brand here, a good rule of thumb is to go with the specs of the guitar closest to yours: usually meaning if the neck is glued in go with Gibson, and bolted or screwed in, go with Fender. When working with thousandths of an inch, remember that at some point you’re just splitting hairs. Don’t drive yourself crazy, you probably won’t feel the difference between .012 and .010. Adjust your truss rod in ¼ turn increments only. After making a ¼ turn adjustment, use the heel of your hand to gently but firmly hit up and down the back of the neck a few times. Obviously don’t hit it too hard but shocking the neck like this will help adjust the wood faster. Wait a minute or two, re-tune, and check the measurement again. Repeat as necessary.

Next comes the saddle adjustments. This may be the most common thing people want adjusted. As a luthier you hear “I want the lowest action possible with no fret buzz” all the time. If I had a dollar for every time I heard this, I wouldn’t be setting up guitars

. The reality is there is an inverse relationship between action and fret buzz, the lower the action the more buzz. I know I might get some blowback for saying this but if the buzz can’t be heard through your amp, it’s not an issue. You could have the highest action on the highest archtop guitar and still get a little buzz if you play hard enough. That’s just the nature of the beast. But anyway, back to the topic at hand. Keep your capo on the first fret and measure your string height at the 12th fret on set necks and 17th on bolt ons. Depending on your bridge, you’ll either have to adjust the saddles individually (Fender and other tremolos) to match the fretboard radius, or adjust the bridge as a whole because the radius is built in (Tune-O-Matic, wraparounds, Floyd Rose, etc). A 6 inch ruler graduated in 32nds and 64ths is best to take these measurements:

We end our setup journey today at the nut. Symptoms of a bad nut could include buzzing when the string is played open or high action at the first fret. I usually recommend letting a professional fix your nut (that’s what she said, I know). Typically a new nut will run you $100 or so from a professional. Trust me, it’s WORTH IT. Not only do they have the correct tools to do this but if you try it yourself, there’s a high chance you scratch the headstock of your guitar. Even masking tape can’t stop the sharp end of a file.

At the end, a guitar tech will intonate the guitar to ensure it plays as in tune as possible. This is another aspect I would say to leave to a pro. It isn’t nearly as important as the other parts of the setup. In a general sense, intonating your guitar involves moving the saddles ever so slightly to make sure that your instrument plays as in tune as possible. Unless you are a seasoned professional, you could play a guitar for 30 years and never know the intonation is off. But if you have a professional set up your instrument, you might as well have them check this because it’s usually built in the setup cost.

I hope this article has been of some value to you and your new guitar. A setup is a guitar tech’s bread and butter but basic instrument knowledge and tool handiness can save you a lot of money. If you have any questions or think I’m wrong on something, I’d love to know (I mean this sincerely, most guitar techs are grumpy old men set in their ways, but I’m always open to new methods and ideas!)

Scroll back to top